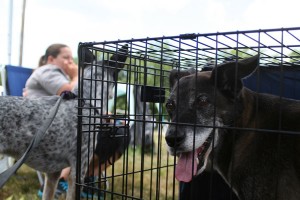 Rio standing right outside Risa's crate. Generally, she is not a fan of dogs anywhere near her when she's in the kennel. But we've been working on it and, of course, Rio is an exception.

Yesterday, Risa was reunited with her best friend: Rio. It’s been over a year since they’ve seen each other but they were so happy to be reunited again.

Rio was up our way for an agility trial: his first ever. His first and third runs were very nice. There was a small hiccup in the second and his final run was beautiful. It was a nice outing for a first-time though I’m not surprised. Rio’s an amazing little guy and his handler does a great job with him.

The trial was held where I usually take Risa to go lure coursing. Suffice to say, she was a bit disappointed that she was not there to chase the bunny immediately. (She spent all day looking for it!) We spent most of the day hanging around with our friends. Risa was crated and I helped by holding onto Rio when needed and videoing my friends’ runs. It was an incredibly laid-back atmosphere (it’s always amazing how things vary between venues) which was so nice as agility can be a very amped up sport. I started off with Risa’s kennel completely covered but ended up opening it up completely by the end. There wasn’t much dog traffic past our spot, mainly just the three dogs in our party. This made it easy for me to be more lax about Risa’s visual stimulation and gave me plenty of opportunities to reward good behavior. She only had one major reactive moment when a dog passed too close to her kennel near the end but it wasn’t a huge deal. Aside from that, she was practically perfect!

After the agility event came to a close, it was time for lure coursing. All three of the dogs are lure coursing maniacs so they were all pumped to go at it!

I decided, after Risa was so ‘whatever’ when another dog got loose during one of her coursing runs earlier this year, that we should have Risa and Rio race. Knowing how good the two dogs are with each other, I figured it would be a lot of fun. I will admit that I was a bit nervous when it came down to race time. No matter how good two dogs are, lure coursing is a very exciting event. I’ve seen housemates displace on each other just watching the runs. But I had nothing to worry about. Risa and Rio had a blast!

While Risa may have won the race despite being twice his age, to be fair, Rio was tired! He had run 4 agility courses and one lure course before their race. I suppose that means a rematch is necessary? Bring it on! 😉 Risa also took home her Wylde Courser Extreme title. It took 33 runs to earn that!

The humans went out to eat afterward while the dogs rested. Then we had a quick photoshoot of the gang together and a short meet-n-greet session. Risa finally got to meet Delta and they greeted nicely.

It was a spectacular day overall and I only wish I could do this sort of thing more often. It was a great experience for Risa and I know I had a great time hanging out with my friends. It would be awesome if they were closer so we could easily do this again! 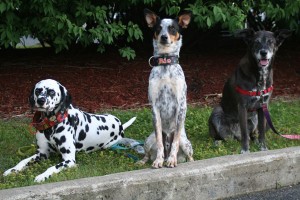 I'm just a traditionally-trained artist with interests in dog training. I currently teach classes at the local obedience training club (tricks, freestyle, and Rally-FrEe) and I also teach classes professionally for an organization who helps veterans train their own service dogs.
View all posts by Jamie →
This entry was posted in Agility, Dog Sports, Fear, Lure Coursing, Reactivity, Training. Bookmark the permalink.