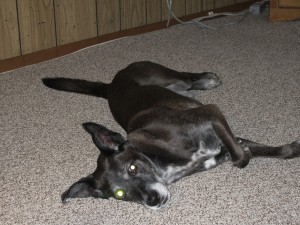 Are you ready for rally!?

Starting April 4, AKC is implementing new signs and rules for rally courses. I have known of this change since the end of last year and, quite honestly, was looking forward to it. The main reasons being that 1) I thought rally needed to be harder and 2) they were eliminating the Honor exercise in Excellent which meant Risa and I could continue to compete.

Despite knowing the changes were coming, I haven’t taken any time to introduce the new signs and behaviors to Risa. Partially because we’ve switched venues back to freestyle. Our next AKC rally trial wouldn’t be until November. But mainly because I didn’t want to train the signs wrong. (This is the same reason I’ve been slacking on teaching the Level 2 APDT rally signs.) It’s way harder to go back and fix your errors both in what your dog is doing and what YOU are doing. I was hoping the local obedience club would offer a class or seminar on the new AKC signs and, to my delight, they did. I signed us up without hesitation.

Along with going over the rule changes and discussing the new signs in depth, we were allowed to run a course with our dogs. Now, as I mentioned, I had not practiced the new signs AT ALL with Risa. So the idea of running a course was pretty nerve-wracking and daunting. But, knowing she didn’t know what the new criteria was, I wasn’t really all that worried about what she would or wouldn’t do. We hadn’t trained the signs so she couldn’t mess them up. She can’t be wrong when she hasn’t been taught what right is. 😉

I was fortunate that they set up two courses: one for the Novice/Advanced signs and one for Excellent. I had to have walked the run through 6 or 7 times and did two of the signs by themselves after all that at least twice. (My usual walk through is 2-3 times.) I usually don’t fret the signs when I do rally because I know them by sight. Today, that was not the case. While I did catch on to what I was supposed to do pretty fast, it still was tough for me to remember it all. Add in Risa and the ring nerves and I knew it wasn’t going to be so simple. I didn’t know the signs any more than Risa did!

Despite not having done the signs before and despite our hiatus from rally training, Risa actually did pretty well. As far as the signs went, she only blew two of them completely. The first I knew she wouldn’t be able to do. It was the send over jump and the jump was a broad jump. I rarely practice jumps with her as it is. Risa has rarely seen a broad jump and, the last time she saw one in a trial, she walked across it (which is an automatic NQ). So I knew there was no way on Earth she was going to go ahead of me over the jump and then come back to heel position. I tried it anyway. The best I could get from her was her walking across the planks and then coming back to heel position. And that was on the second try. Oh well!

The other sign she totally blew was the halt, take two steps forward, pause, call your dog to heel as you walk away. Risa stayed when I asked her to just fine but she didn’t move an inch when I cued her to heel. This was not unexpected. I do not work her with my back towards her that often and I already knew she had issues with a similar sign in APDT rally. So no surprises there.

Those two signs I knew Risa was going to ‘fail’ at. I was, however, surprised at how well she did with several of the other new signs. These are fairly complicated signs that were hard for me to remember how to correctly do all the parts of, let alone expect Risa to perform them right. The first was the new moving down sign where you cue your dog to down as you keep walking 6 feet away to another sign. At that sign, you turn around to face your dog and call them to heel (either around behind you to heel position or swinging in on the left). The dog then halts in heel position, you pause, and move forward. Amazingly, Risa did this one almost perfectly (her sit in heel was crooked). The other multiple step sign she also performed with amazing precision despite our lack of familiarity with it. On this sign, you approach and stop while your dog remains in a stand. You cue them to stay and you walk 6 feet away where you turn to face them. You cue the dog to down. After they down, you cue them to front and then finish them left or right.

The replacement for the Honor exercise is a sit/stay performed right after the Finish sign. I cued Risa to sit and walked away to get her leash which was 15 feet away on a table. I returned to her, walked around her into heel position, and leashed her up. THAT was pretty impressive to me because it’s been ages since I’ve done any long sit/stay work with Risa. And, with a judge in the ring close by, she could have easily broken position when she saw me leaving. But she held it beautifully.

Overall, I was extremely pleased with how well Risa performed the signs. It made me feel good as a trainer because, even though she hadn’t done these movements in this particular sequence, she was still able to do as I requested. Unfortunately, my weaknesses were still showing today as Risa’s focus was horrendous. 🙁

We started off good at the start line with a very focused beginning. It wasn’t long before I completely lost her, though. I spent a good portion of the course trying to get her back into a focused heel with me. She wandered off to sniff, checked out the judge, and was just completely on her own. There was a small section in the middle where I had a nice, connected partnership with my dog. But it was short-lived. Despite working on heelwork at home, I am still failing to get what I want. Let’s face it. The family room is not nearly as distracting or good-smelling as a trial. I really need to up my game and work with Risa on heelwork and focus behaviors in more busy areas. Harder to pull off in the wintertime for sure. But we’re going to continue to struggle if I don’t start upping the criteria. (And, if I’m brutally honest with myself, I lose her focus in the boring family room a lot too.)

Overall, this was a great opportunity for training. We learned the new AKC signs so we’ll be properly prepared come fall when we will likely find ourselves in the AKC Excellent ring. It was also a good chance to get out and work around other dogs again and work on focused heeling (which I did AFTER we had such a poor showing in the ring). Risa also got to be out around dogs and do some more reactivity training. She did try and sneak some sniffs of dogs’ behinds while we waited around. Curiosity is good. She also had a bit of trouble when some other dogs were barking but she was able to calm herself down with little input from me (I simply walked her away to give her more distance to calm down). Ris did have a minor reaction to another dog who must have given her ‘a look’ or something. I didn’t see what set her off nor did I see her getting ready to go off. A fellow competitor had just called to me to tell me how they’d done and, for the split second I took my focus off of Risa, she reacted. It was a very minor snark and Risa wasn’t close enough to the dog to make contact. So, all in all, it was a great day out!

I'm just a traditionally-trained artist with interests in dog training. I currently teach classes at the local obedience training club (tricks, freestyle, and Rally-FrEe) and I also teach classes professionally for an organization who helps veterans train their own service dogs.
View all posts by Jamie →
This entry was posted in AKC, Dog Sports, Dog Training Seminars, Rally, Reactivity, Training. Bookmark the permalink.