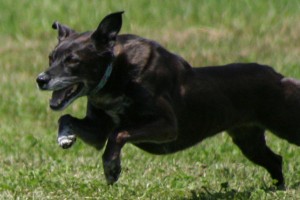 I was finally able to take Risa lure coursing again. She got to go and try it out in July this year and she had a blast. In fact, she had so much fun, she didn’t want to come back! So, after her second run, she took an additional two laps around the field and then took a brief tour of the training facility grounds. *Sigh* Dogs certainly keep one humble!

Today, I was hoping for better luck. After all, we’ve been working with the flirt pole and doing some recall work. Risa remembered the place as soon as she got out of the car. She knew she was in for some fun!

I signed her up for two runs back-to-back. I wanted her to see that coming back to me does NOT mean she will have to go back into her kennel right away. This way, I was able to set up a great reward for coming back to me after the first run: a second run! I also brought our flirt pole out with me in case I needed it.

I had planned on letting her stretch her legs and potty before her run but those thoughts were quickly dashed. As soon as I got her out of the kennel, she was dragging me towards the middle of the field. Guess she remembered how much fun she had last time. 😉 She managed to get away from me while the lure operator was setting up and did a short little run before her official first run. Our work with the flirt pole payed off. Risa showed no interest in the plastic bag ‘bunnies’ once they stopped last time. This time, however, she played tuggie with them making it a bit easier for me to grab her. I collected her with little trouble after her first full run and releashed her. Then, it was time for her second chase.

After her second run, she decided to evade capture again. She didn’t go far and just seemed interested in checking out the smells in the field. The course operator was so patient and tried to lure Risa back with the racing ‘bunnies.’ I was embarrassed, of course. But, as the lure operator pointed out, she didn’t take off nearly as far as she did the time before. So I guess there is hope!!

Once I wrangled Risa back, I took her for a walk to give her a chance to cool down and potty. Not to mention I didn’t want to just put her back in her kennel and be the ‘unfun Mom’ again. 😉 She was pretty social with both the course operator and the person who owned the facility. Overly social, one could say. No hesitation at all in greeting them and getting petted. I was very pleased.

Risa's kennel is surrounded by a blanket to keep visual stimulation to a minimum. She really doesn't like other dogs near her kennel so this helps her feel more safe.

Ris spent the rest of the afternoon in her kennel. I tossed her treats all day while she was kenneled for being calm and when dogs passed by. She was tired but there was no way she could nap. The activity and noise was too much for her. Not to mention she REALLY wanted another turn! As the day wore on, she got more and more anxious about missing out on the fun. I think next time we go coursing, I will take her home shortly after her runs. It’s just too much excitement for her.

I think it’s great that I found an activity Risa can enjoy that doesn’t involve me. Okay, so I have to drive her to the location and pay for it. But the actual event excludes me. She doesn’t need me to run alongside her or direct her to enjoy lure coursing. Risa is a dog who loves to run and chase. It’s in her genes to do this. It’s instinctual. She gets to be a dog. I know she loves dancing in canine freestyle and dabbling in rally. But those activities require her to work in tune with me and do things that aren’t really that doggy. It’s nice to give her a chance to do something she so clearly enjoys and fulfills a natural drive: the chase. 😀

You can click the following link to view a brief clip of Risa’s first run: Risa Lure Coursing

I'm just a traditionally-trained artist with interests in dog training. I currently teach classes at the local obedience training club (tricks, freestyle, and Rally-FrEe) and I also teach classes professionally for an organization who helps veterans train their own service dogs.
View all posts by Jamie →
This entry was posted in Lure Coursing, Training. Bookmark the permalink.

One Response to Lure Coursing